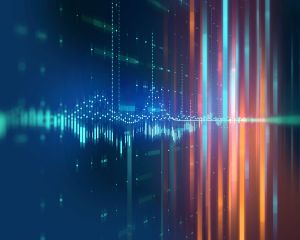 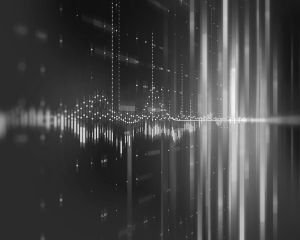 The term Track and Trace is so well-known in our industry that it might be thought that the concept is inseparable but, although they often make use of the same technology and the same standards, tracking and tracing are two distinct processes. The difference is in direction and point in time:

Many objects can be tracked and traced but in the automotive supply chain, the processes are most commonly applied to the tracking of shipments of parts, the tracking and tracing of assets such as containers which circulate between customers, suppliers and other parties, the management of the distribution of finished vehicles and the control and tracing of individual parts both during and after assembly into the vehicle. This latter use is becoming increasingly important as the additional requirements for compliance in the areas of corporate social responsibility, customer protection and the environment become ever more stringent.

Several technologies can be employed to read or capture the unique identifier of an object and other associated information, during different events in the automotive supply chain including OCR, bar-codes and more advanced technologies such as RFID.

Once captured, the information can be transmitted to IT systems using EDI messages or REST-APIs.

Odette provides a standardised toolset for all partners involved in the automotive supply chain with our guideline for the use of the UN/EDIFACT IFTSTA message and our transport track and trace APIs. 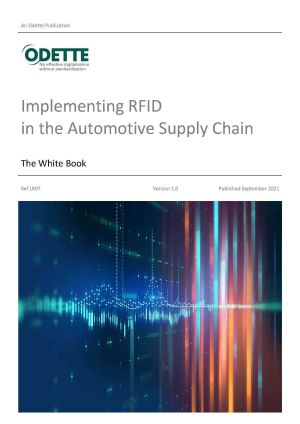 This recommendation aims to help the automotive industry, project leaders and users, and external technology integrators or vendors to implement RFID processes across different partners of the supply chain, in order to obtain good interoperability and avoid multiple solutions that could become a blocking point for industry suppliers.

The document covers different logistics and supply chain use cases, some of which are described in more detail in related annexes. It focuses on issues which contribute to defining common standards for a better interoperability between the partners involved.

In terms of technology, many contactless radio frequency technologies are available and can justly be applied in specific use cases. In order to simplify the recommendations, this document focuses on Passive UHF (Ultra High Frequency) RFID technology. 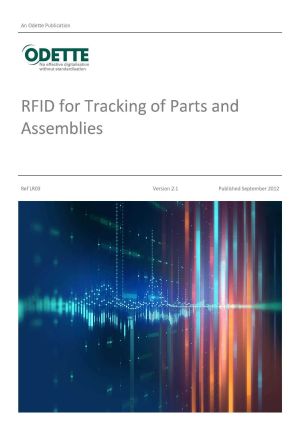 RFID for Tracking of Parts and Assemblies

This Odette recommendation describes the processes and methods of tracking and tracing of vehicle parts and enabling the authentication of original parts using RFID technology. It has been developed to move towards achieving widespread standardisation of RFID component usage, tag data storage and RFID technology implementation across supply chains. 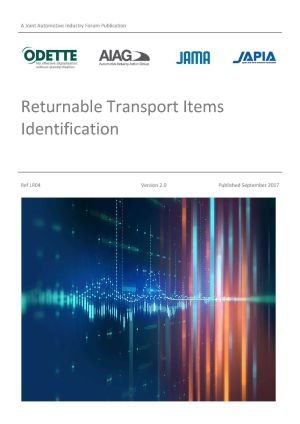 Version 3 published March 2021. RFID technology has been widely adopted by the automotive industry in individual organisations due to the efficiency and security gains it delivers. However, widespread use between companies is currently much rarer due to compatibility issues. In response to this, Odette, AIAG, JAMA and JAPIA have jointly developed recommendations for RFID use in Returnable Transport Items Identification. The aim is to help moves toward the creation of general purpose global guidelines and accelerate further international adoption of RFID solutions. 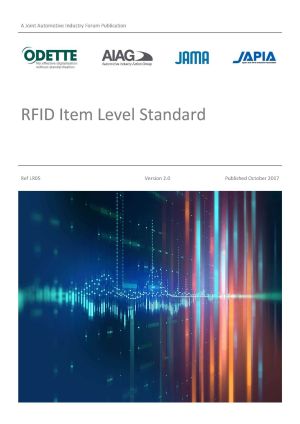 Version 3 published March 2021. This Radio Frequency Identification (RFID) Item Level Standard describes best practices, processes, and methods for item identification, verification, traceability, product characteristics, and Vehicle Identification Number (VIN) throughout the global automotive supply chain. Extensive efforts have been made by the automotive industry to incorporate interchangeable data use between 2D optical symbols and electronic media such as RFID. This publication gives standards for the implementation and use of RFID in such applications and was jointly produced by Odette, AIAG, JAMA and JAPIA. 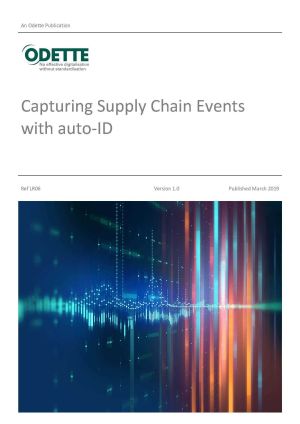 To achieve process transparency, machine-readable objects and ways of tracking these objects along the process chain need to be defined and implemented. The Odette Recommendations LR01, LR02, LR03, LR04 and LR05 outlined the foundations and the next logical step is the implementation of standardised communication with all business partners across company boundaries, based on international standards he Odette Recommendation “Capturing Supply Chain Events with auto-ID” addresses this issue. 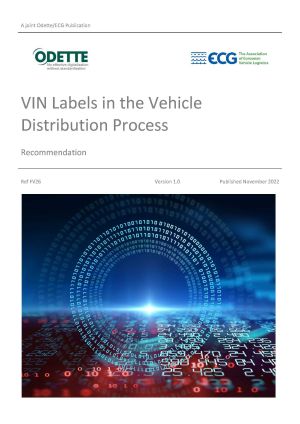 Developed by Odette and ECG, this recommendation has the following objectives: 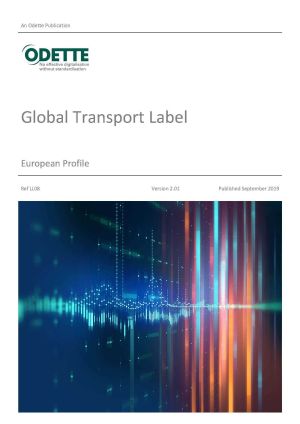 Members of the JAIF combined the best features from their own label standards – including ISO 15394, ANSI MH10.8.1, the Odette Transport Label and the AIAG B-10 to produce a standard Global Transport Label which includes features such as the ISO “Licence plate,” Linear Bar Code 128 and 2D Data Matrix, QR Code and PDF417. Based on this standard, Odette has further developed and maintained a European profile. 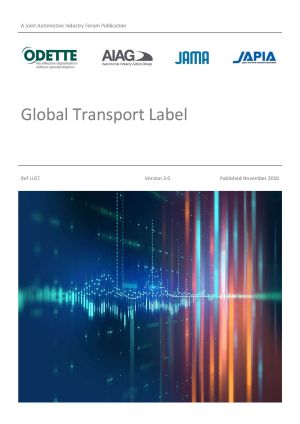 This document details common Global Transportation Label standards on container-labelling for use by suppliers and customers, and has been updated to include Data Matrix and QR code 2D symbologies. It was developed by collaboration between the members of Odette, AIAG and JAMA automotive associations representing more than 80% of worldwide production. 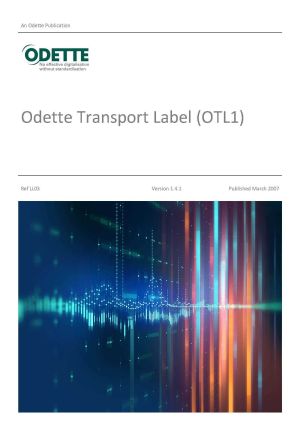 This is the original A5 Odette Transport Label (210mm x 102mm) which is designed to be used on product packaging units and transport packaging units sent between supplier and customer. First introduced in the 1980s, this label spec has been updated several times and is still in widespread use in the automotive industry today. 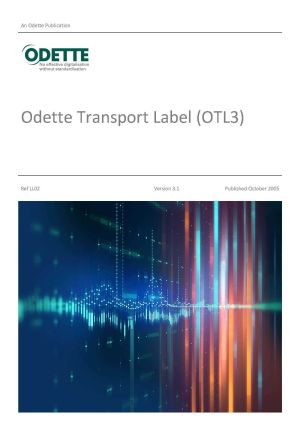 This Odette label (210mm x 74mm) was introduced to allow its use on smaller units where the original A5 label was too large. It also allows for the inclusion of additional logistics information to facilitate the automated movement of product packaging units from warehouse to trackside. 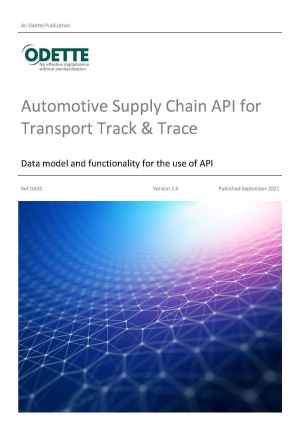 Describes how to define and implement standardised REST-API interfaces for the collection and provision of discrete pieces of information supporting logistics activities in the automotive supply chain.

It includes a data model and functionality for the use of REST-API in transport processes as an extension to established EDI data exchange processes. 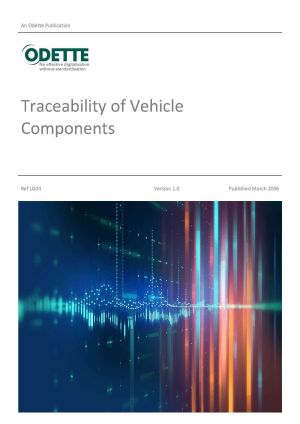 The extended supply chains of automotive businesses require accurate and efficient traceability of parts and components across several layers. But to ensure that components can be traced properly throughout different organisations and systems, an element of standardisation of tracking processes is needed. This document includes a variety of standardised processes for implementing component traceability and identifying technical specifications. 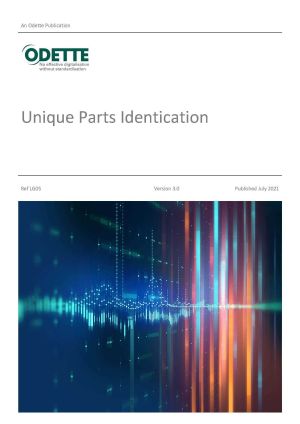 To accurately trace parts and components they should be clearly and easily identified using unique codes. This Odette recommendation provides details on how to implement and use Unique Part Identity (UPI) codes – one for each specific component – to achieve this. It explains how they can be used on safety components and enable access to the industrial history of a part or group of parts in component databases. 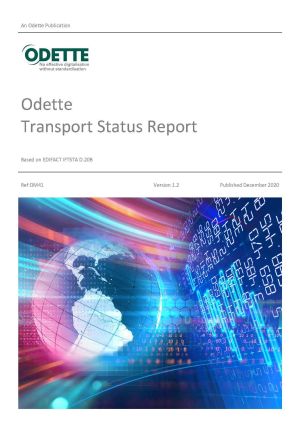 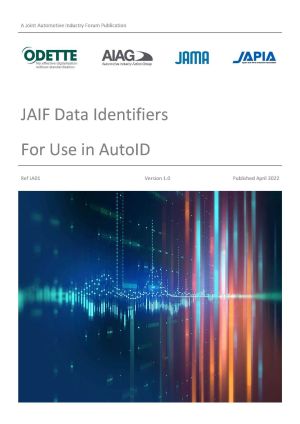 JAIF Data Identifiers for Use in AutoID

The JAIF* has created a separate table of the ANSI MH10.8.2 Data Identifiers that are actually in use in automotive AutoID applications or are referenced in the various AutoID Recommendations that have been published, either jointly or independently, by JAIF members.